There is A LOT of pressure that teenagers face these days.

And having a helicopter mom like Hannah Webber…? Not exactly helping the situation!

Hannah hovers. Like, a lot. She is willing to do whatever it takes to make sure Sam is at the top of everyone’s list, and has every opportunity he deserves – including getting into the prestigious Dunning School. Even if she has to sacrifice her own life and possibly even her marriage.

And when her only child is accepted to the prestigious private high school, of course she will do everything in her power to make sure he is accepted in the community and thrives within it, but she also attends every single function – no matter how small.

“The Nine uncovers the underbelly of an elite private school, revealing decades-long corruption, while also exposing how the fervent dreams of mothers for their children can shatter families. Jeanne Blasberg delves with unflinching precision into the chasms between parents and children, a novel revelatory for the author’s willingness to scrutinize both mother and son and their stifling bond.”
―Randy Susan Meyers, bestselling author of The Widow of Wall Street and Waisted

Sam does begin to thrive away from his mother’s constant hovering, but when he gets wrapped up in some pretty scandalous secrets at the school, he finds that he will finally have to make his own decisions and do what is right, because his mother may not be able to help him this time.

This was a really complex and interesting read. The private school life is pretty foreign to me, and also fascinating. As is the mother and son relationship, but this one clearly shows just how strong and unbreakable a mother’s love can be.

The writing was really fantastic – and I look forward to reading more from Jeanne!

Thank you to Suzy Approved Book Tours {partner}, She Writes Press, and Jeanne Blasberg for this fantastically absorbing read! 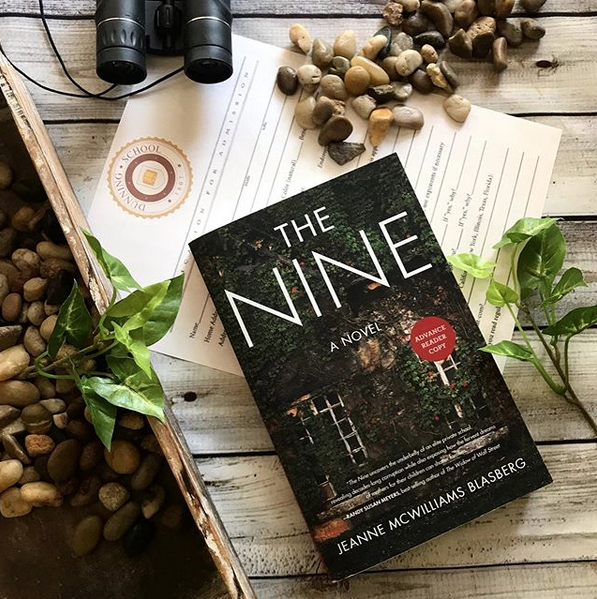 Hannah Webber fears she will never be a mother, but her prayers are finally answered when she gives birth to a son. In an era of high-stakes parenting, nurturing Sam’s intellect becomes Hannah’s life purpose. She invests body and soul into his development, much to the detriment of her marriage. She convinces herself, however, that Sam’s acceptance at age fourteen to the most prestigious of New England boarding schools overseen by an illustrious headmaster, justifies her choices.

When he arrives at Dunning, Sam is glad to be out from under his mother’s close watch. And he enjoys his newfound freedom―until, late one night, he stumbles upon evidence of sexual misconduct at the school and is unable to shake the discovery.

Both a coming-of-age novel and a portrait of an evolving mother-son relationship, The Nine is the story of young man who chooses to expose a corrupt world operating under its own set of rules―even if it means jeopardizing his mother’s hopes and dreams.

Jeanne Blasberg is the author of EDEN: A Novel. The winner of the Beverly Hills Book Awards for Women’s Fiction, and finalist for the Benjamin Franklin Award for Best New Voice in Fiction, and Sarton Women’s Book Award for Historical Fiction. EDEN was released in May 2017 by She Writes Press. Jeanne’s second novel, The Nine, will be released by She Writes Press in August 2019.

After graduating from Smith College, Jeanne embarked on a career in finance. Even as she worked primarily with numbers, she always had an interest in writing. She has been an avid journaler throughout her life, eventually taking inspiration from her childhood writings to pen EDEN. She is a student and board member of Grub Street, one of the country’s pre-eminent creative writing centers, where she is working on her second novel. Jeanne is also a board member of the Boston Book Festival. Jeanne and her husband split their time between Boston, MA and Westerly, RI. She loves to travel, play squash, ski, and enjoy the sunset over Little Narragansett Bay.

7 thoughts on “The Nine by Jeanne McWilliams Blasberg”